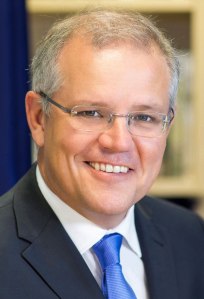 Say hello to the face of Australia. It’s roundish, pale-skinned, short-cropped hair top and sides, wearing glasses and now, because of one day in May, a smile as big as the Nullarbor.

It’s the face of ScoMo.

For one who doesn’t travel the length and breadth of the country, as do leaders and wouldbe leaders in a hurry to their destiny, it is slightly disconcerting.

Should one have known that all along Australia is ScoMo writ and painted large? After the result of May 18, dare we say we are now the sons and daughters of the great ScoMO, god of all things antipodean?

For certainly Scott Morrison is a miracle worker. There have been enough opinion polls backed up to Darwin predicting he and his party would lose. ScoMo turned that on its end.

In his victory speech, he declared, “I’ve always believed in miracles.”

As a good and practising follower of Pentecostalism he would say that. So there we are – most of us through the act of voting have felt the spirit of the Lord moving through us. How else to divine May 18?  The election result was a miracle, therefore, as all miracles emanate from the God of Pentecostalism, we are not only now the face of ScoMo, but we move in mysterious ways, too.

It is the resurrection before the death that had been foretold for months. A miracle indeed.

This was quite a lot to comprehend on a Sunday morning – the rise of the messiah from the shire (as one newspaper jauntily japed) – after the night before.

But let it also be said, Morrison was with humility.  He praised not the Lord but the little people on Saturday night: “It’s always been for those of you watching this at home tonight, for me and for my Government, for all of my team, it’s all about you.

“Tonight is not about me, it’s not about even the Liberal Party. Tonight is about every single Australian who depends on their government to put them first. We’ve got a lot of work to do. And we’re going to get back to work.

“We’re going to get back to work for the Australians that we know go to work every day, who face those struggles and trials every day.”

He would, by extension, deliver on his belief “in a fair go for those who have a go”.

The crack in this mantra, which in its constant retelling has hardened into seeming truth, is that in fact it mocks the truth.

It mocks those, unfortunate of circumstances, whose lives are bashed against the rocks by forces beyond their control. But they’re not the true believers. They are not the “quiet Australians”. They are the invisible people, those on welfare, for instance.

Thus in the certitude of nature’s cycles, the sun rose May 19 upon a nation that it appears was hiding in plain sight. Again more than a little disconcerting.

The writer Rainer Maria Rilke once observed that “there are quantities of human beings, but there are many more faces, for each person has several”.

As this election has shown, trying to paint a portrait of a nation can be a foolhardy exercise. It takes a rare breed to see beyond what you want to see. Perhaps, it is all but a mask. Perhaps values are just a sliding scale of self-interest and altruism.

Perhaps, it is about face values. Certainly, ScoMo is true to Rilke’s observation. There is the face of refugee condemnation, the face of friendly coal, the face of trumped-up gang fear, the face of a hollow vessel.

Morrison travelled the length and breadth of the continent. A man alone on a crusade. He only had to keep going so that the blur of his movement hid his inaction. Policies didn’t even come into it. It was about binding his face to enough of ours so that now as a nation that is who we are.

The face of ScoMo. Say hello to ourselves.

One thought on “ScoMo: Has this been the face we’ve been aspiring to all along?”