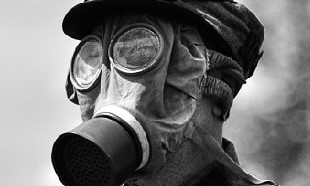 In the morning, walking under the oak trees, acorns fall in a slow random rain. There is no rhythm to it. One hits the earth with a pop, then another, several at once in a rolling thud thud thud, then none. Silence. The ground is strewn with acorns, a carpet of possibilities. Under the green canopy, the future of these acorns can be seen in the saplings and the mature oaks, the archaic torsos of bark and wood shaped by time and the elements.

This is the ecology of survival; this is life on earth, and this is me among the turning of the seasons, thinking of the colours of the day, of natural beauty and natural torture.

How many children had their life before them?

Gas did them in. Those children of Syria. Their flesh was not ripped, their limbs were not torn. They breathed in the gas. And the gas did them in.

The gas was sarin. It was developed in Germany in 1938 as a pesticide. What an exquisite commentary on the barbarism now at play. It was created to kill bugs, non-humans. And that is now how it is viewed by those who use it. The targets are lesser humans than the ones with the missiles. Their lives are of no value. They are insects.

Sarin is colourless, odourless and tasteless. So in its first penetration you do not know it is within you. And then you begin vomiting or suffering diarrhea, you can’t see, you can’t breathe, you drool, you convulse, limbs twitch. You die.

It’s not the first time. Of course it is not. In 2013, sarin was used in Damascus. One thousand people died.

The Washington Post reported a victim’s reaction: “It just took seconds before I lost my ability to breathe . . . I felt like my chest was set on fire. My eyes were burning like hell. I wasn’t able even to scream or to do anything. So I started to beat my chest really hard . . .  to take a breath . . . It was so painful. It felt like somebody was tearing up my chest with a knife made of fire.”

Gas attacks have a dimension of cruelty that a bullet does not have. There is a time of agony before death. It is not an unknown element. Whoever sends the gas knows the consequences. It is sadism. And then it is murder. It is not new. If not sarin, then chlorine. 2017  may as well be 1917. Germany used it several times in World War I. Britain did as well. If not chlorine then phosgene or mustard gas. The capacity of humans to inflict torture on each other is overwhelming.

A century ago, Wilfred Owen wrote to his mother, “Here is a gas poem, done yesterday.” He called it Dulce et Decorum Est. It is the first part of a line from Latin poet Horace: It is sweet and honourable to die for one’s country. Owen was using it in bitter irony. A death such as this, from gassing, for a cause without substance deserved condemnation.

Bent double, like old beggars under sacks,
Knock-kneed, coughing like hags, we cursed through sludge,
Till on the haunting flares we turned out backs,
And towards our distant rest began to trudge.
Men marched asleep. Many had lost their boots,
But limped on, blood-shod. All went lame, all blind;
Drunk with fatigue; deaf even to the hoots
Of gas-shells dropping softly behind.

Gas! GAS! Quick, boys! – An ecstasy of fumbling
Fitting the clumsy helmets just in time,
But someone still was yelling out and stumbling
And flound’ring like a man in fire or lime.-
Dim through the misty panes and thick green light,
As under a green sea, I saw him drowning.

In all my dreams before my helpless sight
He plunges at me, guttering, choking, drowning.

If in some smothering dreams, you too could pace
Behind the wagon that we flung him in,
And watch the white eyes writhing in his face,
His hanging face, like a devil’s sick of sin,
If you could hear, at every jolt, the blood
Come gargling from the froth-corrupted lungs
Obscene as cancer, bitter as the cud
Of vile, incurable sores on innocent tongues,-
My friend, you would not tell with such high zest
To children ardent for some desperate glory,
The old Lie: Dulce et decorum est
Pro patria mori.

From great suffering, comes great art. What then when the gassed are not soldiers? It is cold comfort to the child gasping for life with every strangled breath. And yet what can a voice give rise to in the face of the brutality of mass murder? Resistance in words. It’s not much.

When US President Donald Trump spoke of his air strikes in retaliation for the gas attack he said, in part: “Tonight, I call on all civilised nations to join us in seeking to end the slaughter and bloodshed in Syria. Also, to end terrorism of all kinds and all types. We ask for God’s wisdom as we face the challenge of our very troubled world.”

And here, among the oaks, in a silent walk on an autumn morning is the path to resistance. Fight against the dying of the light of the spirit to shrug the suffering off as a distant war. Fight against the feeling that it is just another example of man’s inhumanity to man. Do not lapse into not caring. That is the ward of eternal damnation. How we react is how we live.

The acorn can fall far from the oak. We must keep  an ear out to its path.