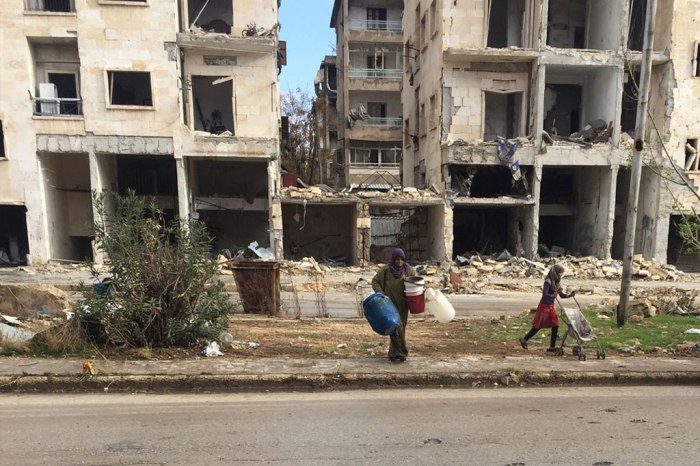 Home is limbo. Home is the road from death and destruction to uncertain life. Home is the dust you carry in your hair and on your face from the place you have been forced to leave behind. It will seep into the skin and reside in you. It will become an idea of home – safe, stable – that you hope to one day plant somewhere else and nourish. This then is your journey: to carry refuge and ruins.

You are not alone. This much is obvious to you on the road. You can see the columns of men, women and children snaking in front of you and behind you, or heaving in and out at borders and fences. A surge that inhales and exhales, sobs and moans, stays mute and roars. And that is only what you see, feel and touch.

You are not alone. There are millions just like you. The Pew Research Centre, citing UN figures, says more than 60 million people were displaced in the world last year, that is within their country or having been taken outside its borders. One in 100 people worldwide, the highest ratio since records began in 1951. The figure is highest in the Middle East where it stands at one in 20.

In Syria, the number of displaced stands at 60 per cent of the population: more than 12 million people.

It is to Syria that death comes most prominently now. And same as it ever was, those who have no part in it, die. That is, the civilians. The innocent used to be called, with a military and political shrug, and ideological yawn, collateral damage. Now, this pretence at absolution from guilt is not even given a cursory nod. Everyone in the zone is guilty. Or worse, of no consequence. Life is without value. It is of no worth. That being so, death can be casually dispensed.

This week the United Nations called the situation in the city of Aleppo in Syria a “complete meltdown of humanity”. It had reliable evidence that in four regions in the city more than 80 civilians were executed by pro-Syrian-government forces. Thirteen were children, 11 were women.

Britain’s ambassador to the UN, Matthew Rycroft, said: “They have gone from siege to slaughter.”

Samantha Power, the US ambassador to the UN, said: ‘‘Aleppo will join the ranks of those events in world history that define modern evil, that stain our conscience decades later – Halabja, Rwanda, Srebrenica and now Aleppo.’’

Power was speaking at the UN Security Council emergency briefing on Syria on December 13.

Here are a few more extracts of her speech: “Here is what is happening right now in eastern Aleppo. Syrians trapped by the fighting are sending out their final appeals for help, or they are saying their goodbyes. A doctor named Mohammad Abu Rajab left a voice message: ‘This is a final distress call to the world. Save the lives of these children and women and old men. Save them. Nobody is left. You might not hear our voice after this.’ A photographer named Ameen Al-Halabi wrote on Facebook: ‘I am waiting to die or be captured by the Assad regime. Pray for me and always remember us.’ A teacher named Abdulkafi Al-Hamdo said: ‘I can tweet now but I might not do it forever. Please save my daughter’s life and others. This is a call from a father.’ Another doctor told a journalist: ‘Remember that there was a city called Aleppo that the world erased from the map and history.’ ”

“The Assad regime and Russia appear dead set on seizing every last square inch of Aleppo by force, no matter how many innocent bodies pile up in their wake. But we keep insisting on answering the UN call for access, for safe and orderly evacuation, because we are not willing to accept that innocent men, women, and children can be butchered simply because they happen to live in a conflict area. Our shared humanity and security demands that certain rules of war hold, the most basic. And it is up to each and every one of us here to defend those rules.”

“To the Assad regime, Russia, and Iran, your forces and proxies are carrying out these crimes. Your barrel bombs and mortars and airstrikes have allowed the militia in Aleppo to encircle tens of thousands of civilians in your ever-tightening noose. It is your noose. Three Member States of the UN contributing to a noose around civilians. It should shame you. Instead, by all appearances, it is emboldening you. You are plotting your next assault. Are you truly incapable of shame? Is there literally nothing that can shame you? Is there no act of barbarism against civilians, no execution of a child that gets under your skin, that just creeps you out a little bit? Is there nothing you will not lie about or justify?”

The full address can be read here: https://usun.state.gov/remarks/7607

Power has a deep moral investment in the massacre of the innocent. Before she was appointed UN envoy, she had written a book entitled A Problem from Hell: America and the Age of Genocide. It won the Pulitzer for non-fiction. In it she examines her country’s response to genocide in Armenia, Cambodia, Iraq, Rwanda and the Balkans.

I interviewed her about the book. She told me: “The big shocker for me… is when I realised there’s all these answers to why we don’t do enough – imperfect information, no national interests, bureaucracy being tailored in that direction, no presidential leadership, no domestic political pressure, a lack of faith in American power after Vietnam, all these reasons – a full year before publication, getting a sense of what the last draft would be like I realised literally it would be like this: ‘Oh my God, we don’t do anything about genocide because we don’t want to.’ ”

Aleppo looks much like every other city that has been bombarded into the earth in a conflict. (Except, of course, Hiroshima and Nagasaki.) It is a wasteland of rubble, and mangled metal. There is no glass in the windows. There is no form to define its encompassing structure to its residents. As its people are reduced to exiles, so its buildings are reduced to debris.

All things are relative. These numbers of displacement, death and misery are a pale shadow of that suffered in the world wars where tens of millions died, were injured or became refugees, or in subsequent conflicts such as Vietnam.

All things are relative. But.

Relativity does not equal mass acceptance. Australians are divided in how they look at those seeking asylum to these shores, even though the number is, relatively speaking, small. And we do accept people from war zones. The government said in September 2015 that it would take an extra 12,000 from Syria and Iraq. Between July last year and October this year, 14,000 visas were granted to those who had been displaced in Iraq and Syria; more than 10,000 had arrived in Australia. In 2015-16, the government granted more than 17,000 refugee and humanitarian visa, according to a report by the Department of Immigration and Border Protection.

But. Some figures are not always the answer. The preceding ones obscure a much smaller tally – that of the asylum seekers in offshore detention – that casts a much larger shadow over our continent.

This is a grotesque distortion of what should be universal: helping those who through no fault of their own are at the mercy of others, or worse, an indifferent world. Until that is resolved, how can anyone say they truly know the nature of their home?