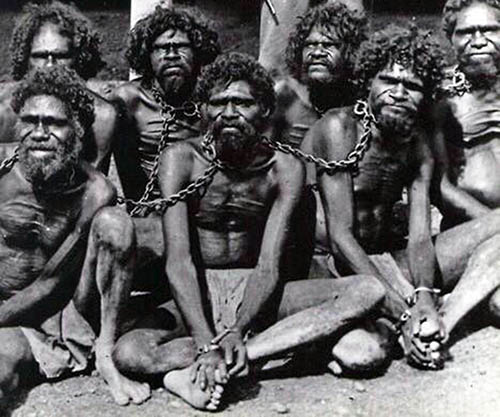 I am confident that our young people will carry on the traditions of citizenship which have done so much to give Australia a proud history.

So said Robert Menzies, Prime Minister of Australia, in an introduction to a booklet commemorating the jubilee of the Commonwealth of Australia in 1951.

Over the next 8000 words the history of settlement in Australia is described in granite-like phrases of certitude, from the discovery of the Great Southland, the arrival of the convict ships, the hewing of British society and civilisation from scrub and bush, the hardships of strangers in a strange land, the establishment of industries, law and order, and the making of a nation drawing the states into a federation; in essence its rising from the earth to bloom under the glorious sun of the British Empire.

It is inarguable that all these things occurred.

The mood of exaltation was captured in a poem that won a competition written for the occasion of the states becoming a nation. An extract from Ode for Commonwealth Day, by George Essex Evans, is included in the booklet:

Not won by blood, nor ringed with steel,

Thy throne is on a loftier height,

Deep-rooted in the Commonweal!

But even in such a paean to heroic endeavour, it cannot be the whole truth if part of it is missing.

Of the Aboriginal people, not a word is written. Not one.

Yes, it was 65 years ago. Allowances have to be made for the times, don’t they? It wasn’t until more than a decade later and after a referendum that Aborigines were to be included in the Census. Before that, it was as if they didn’t count. Certainly in the development of the national psyche, they didn’t, nor was much thought given to indigenous lore, tribal law and ownership of land.

In 1986, the Australian Law Reform Commission published a report on Aboriginal customary law in Australia.

It cited a case from the 1800s in which jurist Alfred Stephen in the High Court in a matter relating to whether Aboriginal law can be a defence said:

“This country was not originally desert, or peopled from the mother country, having had a population far more numerous than those that have since arrived from the mother country. Neither can it be called a conquered country as Great Britain was never at war with the natives, not a ceded country either, it, in fact, comes within neither of these, but was a country having a population which had manners and customs of their own, and we have come to reside among them: therefore in point of strictness and analogy ‘to our law, we are bound to obey their laws, not they to obey ours. The reason why subjects of Great Britain are bound by the laws of their own country is, that they are protected by them; the natives are not protected by those laws, they are not admitted as witnesses in Courts of Justice, they cannot claim any civil rights, they cannot obtain recovery of, or compensation for, those lands which have been torn from them, and which they have probably held for centuries. They are not therefore bound by laws which afford them no protection.”

A generation on from that report, Victoria and NSW have Koori courts, which allow for the reasonable view to be put into practice that while Australians all, the origins of race are important and pivotal to history and behaviour.

Indigenous people really never had a chance to be regarded as equals once the absorption of the country and its resources began. Despite the wishes of the British Colonial Office, the “natives” were always inferior. In 1816, they were given the equivalent of a pat on the head to an obedient dog when passports were begun to be issued to Indigenous people who behaved “in a suitable manner” so as to signify that they had become acceptable to Europeans.

But times have changed, haven’t they? The National Australia Day Council has for more than 20 years worked to reconcile Indigenous and non-Indigenous realities. In 2004, it changed its priorities in its mission statement. “Promoting Australian achievement” was moved from No. 1, replaced with “Unite all Australians through celebration”.

The council is clear-eyed about the implications of the day to “all Australians”. It says: “Aboriginal Australians have continued to feel excluded from what has long been a British pioneering settler celebration, symbolised by the raising of the Union Jack and later the Australian flag, which bears the British flag. Debate over the date and nature of Australia Day continues as the National Australia Day Council seeks to meet the challenge of Making 26 January a day all Australians can accept and enjoy.”

And so 200 years from issuing passports to this continent’s first people to show that they are acceptable to an Empire’s colonialists, we are now seeing what appears to be a storm in a teacup: the decision by the City of Fremantle to have celebrations on January 28 rather than January 26. Except it is the other way round: the outrage it has provoked is the teacup in a storm made up of elements of race, identity and nationalism that is always part of this nation’s weather system. Why so many royal commissions and commissions of inquiry into the issue. More than 100 years, inquiries were held into maltreatment of indigenous people. It’s the constant that bears witness.

Fremantle council says it moved days because the symbolism of Australia Day meant vastly different things to different people. The mayor Brad Pettitt said: “We thought it was time to acknowledge it wasn’t a day of celebration for everybody and it was an opportunity for us to come up with a different format on a different that could be truly inclusive.”

To which Western Australian Liberal MP Ben Morton said: “This politically correct, backward looking approach from the council actually divides Australians and takes us further away from reconciliation.

Assistant Minister for Immigration Alex Hawke condemned the council. (As has the WA Premier Colin Barnett and state Labor’s spokesman on indigenous affairs, Ben Wyatt, who is indigenous. Prime Minister Malcolm Turnbull believes the day should stay where it is). Hawke says moving it is politicising the event. “The government takes a very dim view of Fremantle City Council’s decision to cancel their Australia Day events on political grounds. I want to make the government’s position quite clear; if you use a citizenship ceremony, or your ability to preside over one, as a promotional tool for an antinational day event, I will consider this a serious breach of the Australian Citizenship Ceremonies Code.”

So an event promoted to be all-inclusive is now in the eyes of the government “an anti-national day event”? The primary reaction is aggression – fighting words to defend what? A way of life, a status quo, a tradition? If you want to see how twists to tradition can so easily occur look at Cronulla.

Indigenous elder Robert Eggington has told media that “it’s a clarification of history, because celebrating the day the first gunshots ploughed our blood into the earth is horrific for Aboriginal people.”

The council on its website answers the critics thus:

Does the move away from Australia Day celebrations on 26 January break family traditions and take political correctness too far?

The City of Fremantle is not opposed to celebrations on 26 January for those who so choose – rather, we are offering an opportunity for all Australians to come together on another day.

My ancestors came out on those first boats, isn’t changing the date an insult to my family?

Not at all – all of our ancestors and new immigrants have played a part in shaping Australia as it is today and we value every contribution, which includes acknowledging that 26 January may not have the same implication for all Australians.

Last week, Ray Martin took a handful of whiteys into Aboriginal Australia. The television program was called First Contact. The group comprised the clueless, the clued-in, the ignorant and the arrogant. They were introduced into indigenous life, away from the mainstream and they will see when it collides with it. That the program was made at all illustrates the immense gap in understanding what being Australian truly means.

You cannot be merely a citizen of Sydney’s northern beaches or inner Melbourne or the fields of suburbia. You cannot live in isolation, yet that is the reality. Despite the progress, the incrementally, slow chipping away at the bigotry and the condescension there remains a residue from 200 years of history. It colours the eyes and mind. We see only what we want to see.